Delaware County realizes the importance of small and entrepreneurial businesses. These play a unique, critical role in the economy and require specific economic development attention and support.

These businesses serve two specific functions. The first is that as new businesses are formed, they promote economic efficiency and growth through a process that economists call “creative destruction.”As new firms introduce innovative products and services, they force existing firms to become more innovative as well in order to remain competitive. Those firms that fail to respond to this challenge will fail and cede their market share to the innovator.

The second function served by small businesses (particularly locally-owned, locally-serving ones) is that these businesses secure consumer and business spending within the local economy. Non-local businesses usually centralize distribution and other functions, so most of the dollars spent at these establishments leave the Delaware County economy immediately. Further, most higher-paid corporate executives are also at the headquarters rather than in the county.

The Columbus Idea Foundry is 60,000 sq ft of workshops and offices; working nooks, classrooms and communal spaces for you to explore and create in.

Rev1 Ventures is the investor startup studio that combines capital and strategic services to help startups scale and corporates innovate.

The Dublin Entrepreneurial Center has grown from two tenants to nearly 150, and charted the course for innovation and support of start-up ventures.

The Delaware Entrepreneurial Center is a first-of-its-kind collaboration among Ohio Wesleyan University, Delaware County, and the City of Delaware creating a business accelerator and education center on the OWU campus.

The City of Delaware is currently planning three business incubators. These are entities that provide entrepreneurs with a variety of services that often include access to affordable space, shared business services and technology, business counseling and consulting, access to financing, and mutual support among the tenants of the incubator.

The Central Ohio Region is a major logistics hub.

Key driving industries of the Delaware County economy include manufacturing industries, warehousing and storage, finance and insurance, and professional and business services. Nearby Columbus is home to The Ohio State University, the state capital of Ohio, as well as a concentration of fashion designers and retail innovators, Honda of America’s manufacturing operations, and other entrepreneurs and high-growth companies.

Explore the industries that fuel the Delaware County economy

Delaware County’s Strategic Economic Development Plan includes in-depth analyses of the long-term needs of the key driver industries. These focus both on growth of individual occupations and replacement for workers who transition to other jobs. 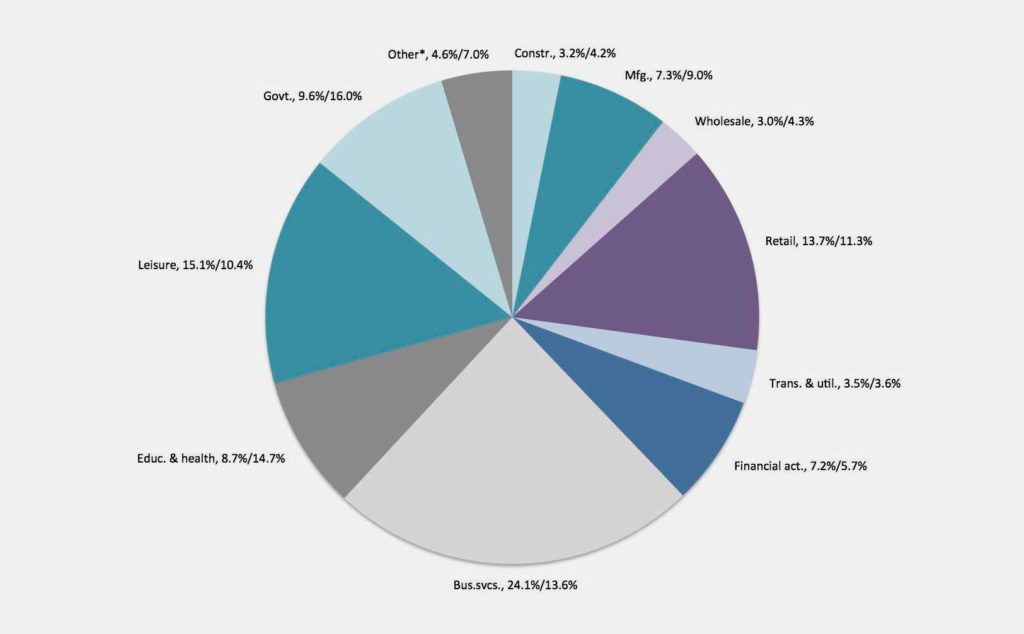 Percentages are the share of total employment for Delaware County and the United States, respectively.
*Sectors with less than three percent of Delaware County employment: natural resources and mining (0.4%/1.5%); information (1.6%/2.0%); and other services (2.6%/3.5%). Source: Quarterly Census of Employment and Wages, U.S. Bureau of Labor Statistics.

In Delaware County the projection is for ten-year industry growth of 1,000 positions – 40% – with an additional replacement need of 440, so the information technology industry in Delaware County will need more than 1,400 new workers over the ten-year period, including 800 in computer-focused occupations.

However, these totals include only workers in the computer industry; they do not include computer professionals working in other industries. The total number of these workers in all industries in Delaware County cannot be determined, but there is a need for 50 new workers in manufacturing and finance and insurance industries over the next ten years. So while the need for 800 IT professionals is almost certainly the vast majority of the total need, others will be needed elsewhere in the Delaware County economy as well.

Distribution and logistics are closely related, but different. Distribution involves the physical movement and storage of raw materials, inventory, and finished goods through the supply chain.

Logistics is the management of distribution in order to ensure that goods arrive at their destination when needed and economically, and that inventory is effectively managed. Logistics is a high-skill field including sophisticated statistical modeling and the understanding of a wide variety of transportation, storage, and handling regulations.

The ten-year projections show a growth and replacement need of more than 1,300 over the ten-year period.

More than half of this need is in only four warehouse occupations: laborers and material movers, stock clerks, packers and packagers, and industrial truck and tractor operators. However, more than one-quarter of the need is in various management, business operations, and administrative support occupations. These include logistics occupations.

JPMorgan Chase is Delaware County’s largest employer and the largest private-sector employer in the Columbus Region. This region boasts the company’s largest concentration of employment in the world. Additionally, insurance activities employ more than 2,900. Insurance employment more than tripled between 2001 and 2012, and now employs more than twice the number that would be expected in an economy Delaware County’s size.

The 10-year projections show a total need of more than 1,100 but this may be substantially understated,

both because of the fact that some industries are omitted from the federal government databases that are the basis of the projections and because a large (but unknown) number of JPMorgan Chase employees are apparently classified by the government in other industries – likely in corporate administration.

Retail is an important amenity that serves to attract workers to communities and neighborhoods. Research has found that property values are significantly higher if well-functioning retail concentrations are nearby.

This implies that ensuring the health of retail developments increases property values not merely of the retail centers themselves, but also of the surrounding residential developments. Delaware County’s extensive retail developments draw retail spending from the remainder of the Columbus Region and beyond.

The analysis estimates a ten-year growth and replacement need for 5,000 new workers in retail and restaurants.

The three largest occupations, retail salespersons, waiters and waitresses, and cashiers, account for half of the total need. A relatively large fraction of employees in many high-demand occupations have less than a high school diploma, as well as some with college but no degree.  This is actually numerical evidence of the attraction of these jobs for high school and college students.

Given the small number of direct agriculture workers in Delaware County, no detailed analysis and projection of agricultural employment is undertaken. However, agriculture is critically important to the Delaware County economy and its role as an emerging driver industry creates a need to focus on the workforce needed to support the industry.

Numerous specialized services are needed to support farm operations and move the farm’s output to market. Business service providers such as attorneys, bankers, accountants, tax preparers, and real estate brokers with knowledge of the unique environment of farming are a critical need.

The farmers indicated that these professionals are not difficult to find, but this could be a significant opportunity for students and existing professionals given the key role of agriculture in Delaware County and nearby counties as well. OSU has training sessions on these issues annually.

Per capita household incomes in Delaware County are far higher than both Ohio and national averages.

Delaware County’s unemployment rate has been consistently below average. The 2013 average rate for Delaware County was 5.1%, while the region was 6.2 percent, Ohio was 7.2% and the national average was 7.4%.

However, while all unemployment rates have declined since the recession, a major cause of the decline was the continuing dropping out of workers from the labor force. (When unemployed workers stop actively looking for work, they no longer affect the unemployment rate.) Analysis shows that the dropout from the Delaware County labor force was somewhat greater than average, which was part of the cause for the recent unemployment rate decline.

Household incomes in Delaware County are far higher than average. 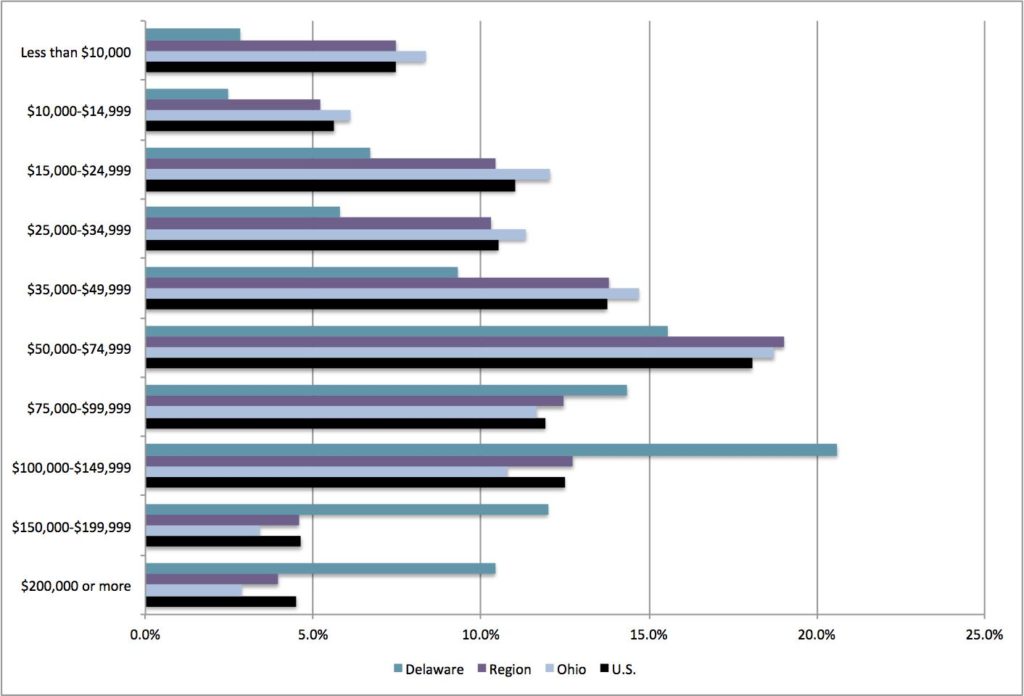 Delaware County Per Capita Income (PCI) increased rapidly through the 1980s and 1990s. However, PCI fell 13 percent between 2001 and 2005. The reasons for this decline are not entirely clear; resident employment was still growing strongly during this period.

The most likely explanation is that the population between the ages of 25 and 34 (who earn less than older workers) grew significantly faster than total population during this period and then shrank during the following five years. Consistent with Delaware County employment trends, PCI in simply leveled off during the 2007-2009 recession rather than declining as it did elsewhere. 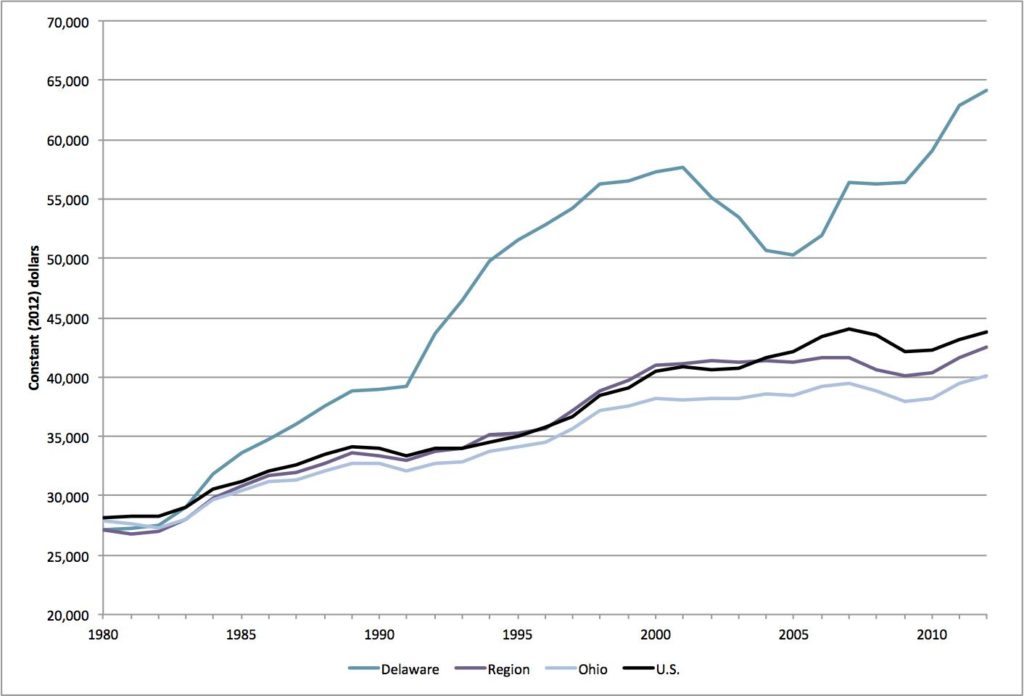 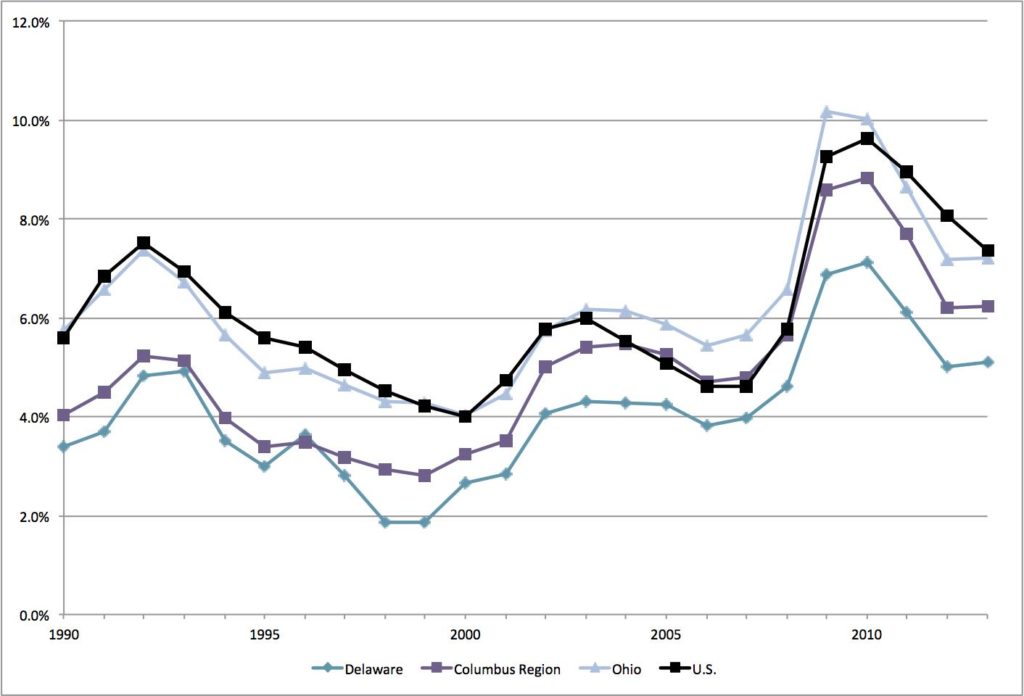 The dominant industry sector in the Delaware County economy is the professional and business services sector, which accounts for 24% of county jobs, nearly twice the 13% share nationwide. 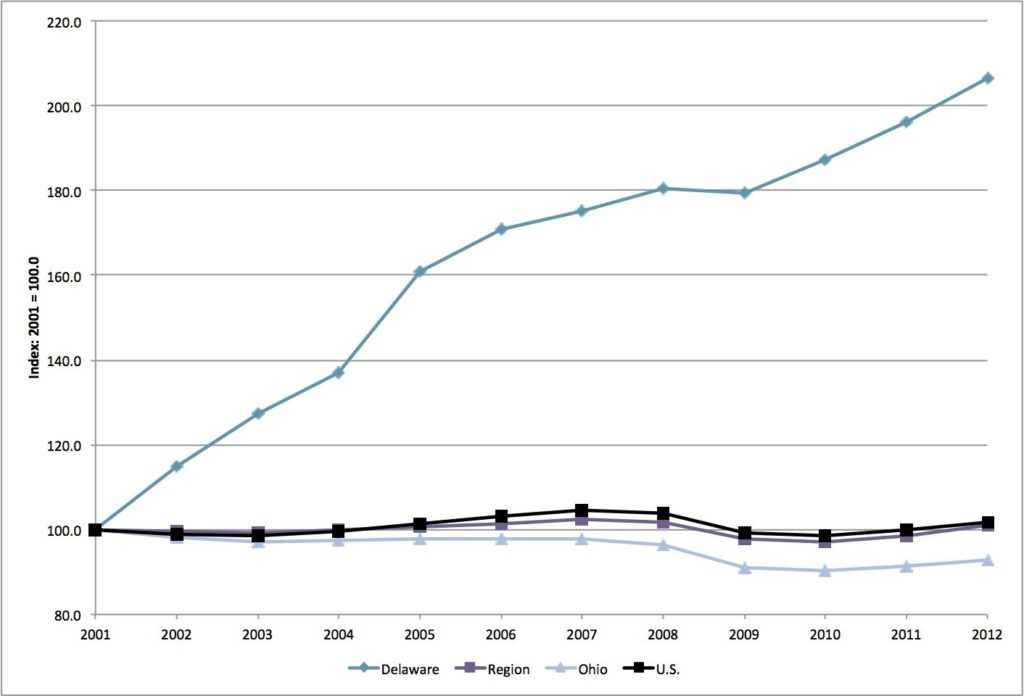 Delaware County is a member of Columbus 2020 via the Mid-Ohio Development Exchange (MODE).

Delaware County is a member of the Mid-Ohio Regional Planning Commission (MORPC), which is a voluntary association of the 12-county Central Ohio region.

It is made up of governments and regional organizations that envision and embrace innovative directions in transportation, energy, housing, land use, the environment and economic prosperity. MORPC strives to make Central Ohio competitive in the global marketplace and is dedicated to transforming existing communities, and promoting sustainability.